Today, San Francisco is celebrating the bridge's 75th anniversary with a 12-hour festival down by the waterfront, which will finish with a spectacular fireworks display. Tens of thousands of people are expected for the festival. There is no parking, so people are encouraged to take public transportation. The bridge will be closed for an hour or so for the fireworks. Sounds like a nightmare to me, so guess we will be watching the excitement on the TV. Here are a few photos from Memorial Day weekend 2 years ago.

Today on the northern west coast, we had the opportunity to view an annular solar eclipse. According to Wikipedia, an annular solar eclipse occurs when the moon's apparent diameter is smaller than the sun, causing the sun to look like an annulus (ring), blocking most of the sun's light. This is also described as a ring of fire. There won't be another one like it until 2023. Here is a great photo from the Internet to demonstrate the effect.

I did not get my act together in time to obtain a solar filter for my camera, or even to buy some special eclipse viewing glasses. I was, therefore, relegated to viewing the eclipse from my apartment through a slotted spoon. Yes, a slotted spoon. And also a hole poked through a piece of cardboard. Never under estimate the lessons you learned in kindergarten. We only got a partial eclipse here in SF, so did not get to see the full ring of fire. Here are some thrilling spoon and cardboard pics.

This is from the beginning when the moon was just moving in front of the sun. The crescent, or "ring," started out on the left

and then moved around toward the top.

It finally moved around to the right side and was done.

Posted by Angela Crider Neary at 8:45 AM 4 comments: 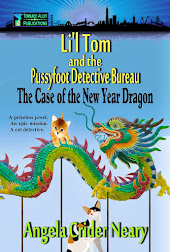